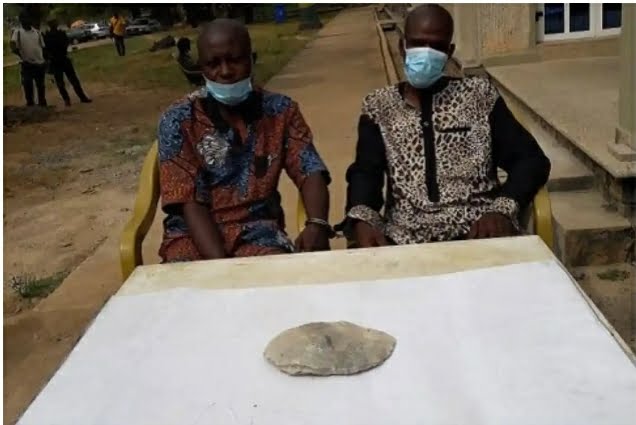 Abideen Rah eem, a 42-year-old man suspected of being a ritualist, has been apprehended by the Oyo State Police Command.

While being paraded, Raheem admitted to exhuming a body from an Ibadan cemetery, chopping off the head, and selling it to an associate for N25,000. He stated that his friend needed the human head for a monetary rite.

On his way home, the suspect claimed, his companion was arrested with the head.

“It was because of his arrest that I was arrested,” Raheem explained.

When asked why he needed the human head, the companion, named as Moruf Ganiyu, said he needed it for a money ritual.

“I spoke with my friend Raheem about the situation, and he promised to get me the head. He called me as soon as he got it. I collected it and paid him N25,000 for his services.

I had intended to utilize the head in a money-making rite.” Ganiyu remarked

In other news, President Muhammadu Buhari will travel to Lagos state on Thursday, December 9 to attend the public launch of Bisi Akande’s autobiography, ‘My Participations,’ the former APC interim chairman’s autobiography.

The event will take place at the Eko Hotels & Suites on Victoria Island in Lagos.

The President will be the special guest of honor at the event, which will be hosted by Babajide Sanwo-Olu, the governor of Lagos, and attended by Tinubu, the party’s national leader, according to a statement from Tunde Rahman, a media assistant to APC National Leader Bola Tinubu.