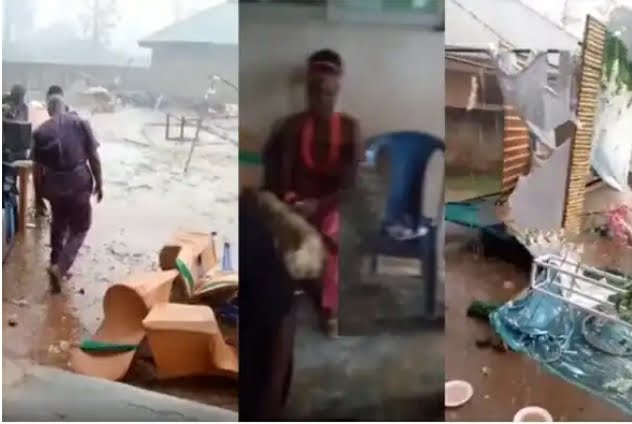 A woman was shown in a video looking completely sad after her traditional wedding was cut short due to excessive rain.

The rain is pouring cats and dogs in the video, robbing the somber event that was intended to be one of the happiest days of the woman and her husband’s lives.

However, once the heavens opened up and poured down severe rains, the footage showed how depressed and dejected she was. The groom, on the other hand, was nowhere to be seen when the video was taken.

In other developments, Sulieman Momoh, a Nigerian man who fought his way back from the brink of death after being diagnosed with colon cancer, has married the woman who stayed by him during those tough times.

Chigozie Effe, a journalist and Facebook user, uploaded images of the young man that depict how heated death was and how he will now spend the rest of his life with the woman who stood by him.

“Christ is the King!” he wrote.

Christ is indeed the King, and I am honored to be a part of Suleiman’s life story, in which he is now married to the woman of his dreams, who stood by him in his darkest hours.

Suleiman is shown in photo 1 at the University of Jos Teaching Hospital, where he is dying of colon cancer. He was left to his fate, yet Christ never left him alone.

Photo 2: At Suleman’s home in Jos, a street journalist conducts an interview with him. While speaking with me, he was in excruciating discomfort. However, the interview catapulted him into the spotlight, with over 3 million Naira raised for him as a result of it.

Photo 3: Suleiman with The Street Journalist at his Jos flat shortly after his second surgery.

Photo 4: Suleman and his wife at their wedding ceremony in Jos North, Plateau State, which took place at Living Faith Church.

They’ve arrived. Mr. and Mrs. Suleiman Momoh are doing well, and Suleiman is in good health.

This concludes my testimony.

The glory belongs to God!!!

The Lady is amazing…