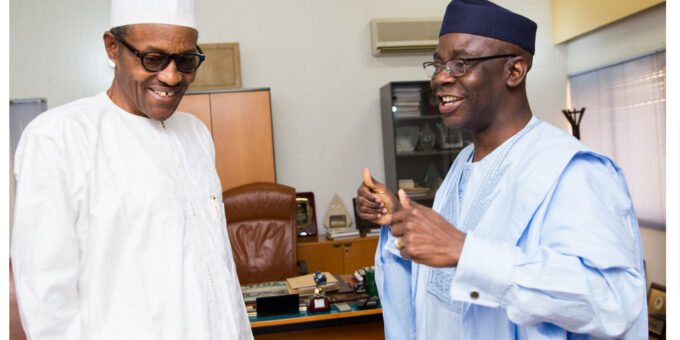 General Overseer of The Citadel Global Community Church, formerly Latter Rain Assembly, Pastor Tunde Bakare has shared his thoughts about the current state of the nation under President Muhammadu Buhari.

In his Easter Message entitled: ‘The conspicuous handwriting on the wall’, Bakare averred that the state of the nation does not represent the Buhari he knew when they took the solemn journey towards rebuilding Nigeria.

The Pastor stated that the legacy of President Muhammadu Buhari is in ”grave danger of being confined to an unsavoury side of history,” and also warned that illegitimate regional actors plan to hijack governance and control the political economy of the regions.

Bakare also described those opposing restructuring of Nigeria as enemies of the country. The Pastor who claimed that God told him that Buhari is coming to stabilize Nigeria, further urged the President to take decisive steps in tackling insecurity, the dwindling economy and anti-corruption.

Fellow Nigerians at home and abroad, good morning and a very happy Easter to you all. Our theme for today’s State of the Nation Broadcast is “The Conspicuous Handwriting on the Wall,” inspired by the account in Daniel 5 verses 1-6 and 13-29.

As you may recall, on January 15, 2011, I was invited by the then General Muhammadu Buhari to run with him on the platform of Congress for Progressive Change (CPC) in the 2011 presidential election.

After initial hesitation, my eventual acceptance was upon the assurance that, amongst other deliverables, our administration would commit to re-engineering Nigeria’s governmental structure with a view to guaranteeing the security & prosperity of our nation & her people.

After a vigorous campaign, GMB gave a deeply emotional public statement at a press conference on April 13, 2011 – “I am in this solely for the love of my country and concern for its destiny and the fate of its people.”

At some point while delivering his speech, GMB broke down in tears as he wept for our nation. Deeply moved, several of us who were with him in the hall also wept. GMB then made a solemn statement: “I will not present myself again for election into the office of the president.”

After the controversial and divisive 2011 elections, as Nigeria drifted along sectional undercurrents and the nation sought a unifying force, some of us prevailed on General Muhammadu Buhari not to quit the stage but to take back his words and form a coalition of the best of the North and the best of the South to salvage our nation. I must admit that I played a critical role in that mission. God had shown me in a vision that GMB still had a role to play in stabilising Nigeria.

TRENDING NOW>>  This is our rating Nigeria's response to Coronavirus - UN

I, therefore, facilitated a meeting in the United Kingdom between him and some of our CPC leaders with a view to forming a coalition between CPC and Action Congress of Nigeria (ACN) that could save Nigeria from impending disaster.

Subsequently, it was my privilege to move the historic motion at Eagle Square, Abuja on February 6, 2013 for the merger of CPC, ACN and ANPP. That step, together with the efforts of other progressive Nigerians, led to the eventual formation of the All Progressives Congress (APC).

However, in 2015, as our nation prepared for general elections, the interplay of social, economic, political and military headwinds came crashing on our national foundations and exposed the fault lines in our nationhood

As the two major political parties, APC and PDP, and their candidates locked horns, our nation was deeply divided along ethnic, partisan, religious and sociocultural lines.

Furthermore, oil prices plummeted across the globe, an economic recession loomed, and severe hardships lay in wait for the Nigerian people.

As drum beats of war reverberated across the landscape with threats to national stability coming from various political interest groups, BH terrorists held sway over vast swathes of territory, and 276 girls were abducted and held in captivity.

In the midst of that chaotic climate, the 2015 general election was the preoccupation of the political class. Many stakeholders were convinced that a change of government was what Nigeria needed at that time and the “Change” mantra was chanted across the nation.

However, I warned that our myriad challenges, including violent sectional agitations, terrorism, socio-economic deprivation, and political violence were merely symptoms of more fundamental problems.

I identified some of these foundational problems to include our faulty and lopsided governmental structure, unresolved historical grievances, unreconciled historical differences, fierce disagreements around identity and population dynamics with a census in view, gaps in the structure of our economy, and the many aberrations in our constitution

I warned that a mere change of government without the definite resolution of these foundational questions of nationhood would amount to putting the cart before the horse and could lead the nation to a catastrophe.

I then advocated pausing the elections within the confines of the Constitution so as to resolve these issues and stabilise our nation before proceeding to the polls.

However, when the nation disregarded wise counsel & insisted on building on faulty foundations, I stepped into the terrain as a nation builder. I worked behind the scenes with the two leading candidates to ensure that our nation was not swept away by the floods of disintegration.

Upon the commencement of the administration of PMB, on various platforms, from the pulpit to the podium, from State of the Nation addresses such as this, to lectures at various fora, I pointed out to Nigeria the way out of the dire situation we are in as a nation.

Furthermore, I engaged the government on several occasions, including direct engagements with the president, because of my desire to see PMB actualise the dreams of a great Nigeria we had committed to.

As I told the president in some of those engagements, his success is my success, and his failure is my failure. It is why I remain committed to seeing him succeed.

I have laid a historical background as an introduction to this address because it is time to speak out. I am compelled to speak out because this is not the Nigeria General Muhammadu Buhari and I had dreams to create when he invited me to be his running mate in 2011.

I am compelled to speak out because the state of the nation does not represent the Buhari I knew when we took that solemn journey towards rebuilding Nigeria.

I am compelled to cry out because of the intent of the president as contained in his tribute dated October 14, 2019 in honour of my 65th birthday…

PMB wrote to me: “We have shared ideas on how to engender a better country and formed a tag team for political power. May the ideas germinate fully, proliferate and give us the country of our dreams.”

For many years, Nigeria was in the intensive care unit of the universe. However, six years ago, against timely warnings not to overlook fundamental and underlying conditions as the country prepared for the 2015 elections, her “caregivers” certified her fit and discharged her.

Underlying conditions have resurfaced and our nation is now in a critical state. Her survival is hanging in the balance and she has been rushed to the emergency room. The diagnosis indicates that a surgical procedure is unavoidable.

The purpose of this address is to present the facts of this diagnosis and point a way out of our current crisis even as we approach a critical juncture in the administration of President Muhammadu Buhari.