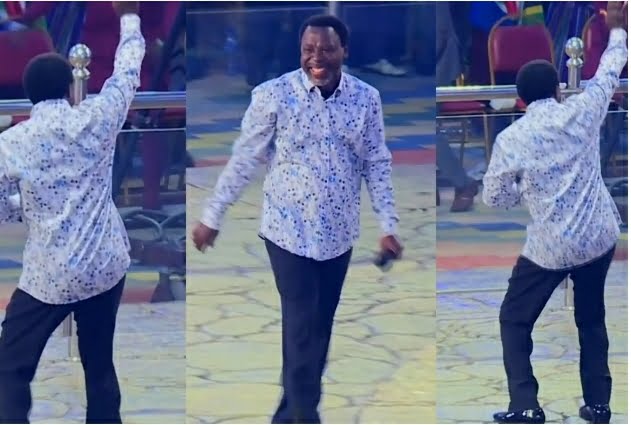 A throwback video of the late Prophet TB Joshua showing off his dancing skills has popped up on social media months after his passing.

Prophet TB Joshua died in June following a short illness after recovering what is alleged to be a stroke and he was survived by a wife and three children.

His funeral was attended by friends and sympathizers from around the world and his wife, Evelyn Joshua has been made the successor of his church, the Synagogue Church Of All Nations.

Whilst alive, Prophet TB Joshua did some dance freestyles in church and a video that will get you emotional shows the moment the late clergyman displayed some impressive dance skills whilst delivering a sermon in a church service.

In other news, a motor rider had a close shave with death after ramming into a store due to brake failure in India.

The motor rider according to a report lost control of his motorcycle and crashed into a clothing store and the unfortunate incident occurred around 8:30 pm on Monday night at Raavichettu Bazaar in Telangana’s Khammam district in India.

A CCTV device captured the moment the motor and its driver rammed into the shop where four people were inside and in the video the rider who was on top speed skid on the floor and somersaulted over the counter after hitting some items packed on the floor.

However, fortunately, there was no casualty recorded as the cyclist or any of the persons in the shop got hurt in the course of the event.