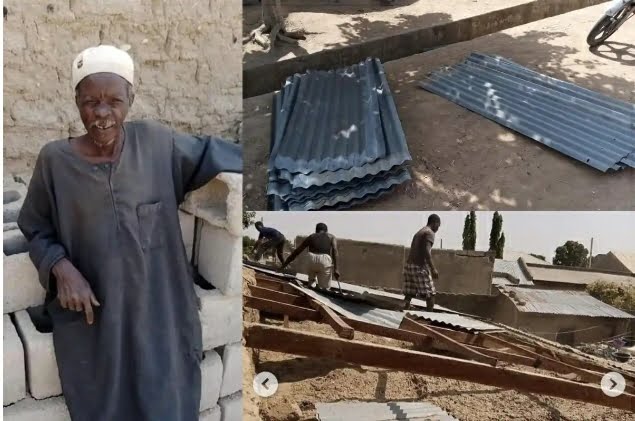 Saidu Faskari, a farmer from Katsina, is said to have taken the roof sheet from his house and sold it to raise money to pay the ransom kidnappers demanded after kidnapping his eldest son.

Faskari was kidnapped in December and spent 13 days with the bandits, according to reports. The bandits freed the old man and kidnapped his son when his son went to pay the N50,000 ransom.

They are now demanding a ransom of N100,000 from the elderly man. Mr. Faskari was heard claiming in the video clip that he was doing it for his son.

“They (bandits) kidnapped my son day before yesterday (Thursday). He had gone to pay the ransom money for my release. I spent 13 days in their den. When my children gathered the N50,000 one of my sons was asked to take the ransom but the bandits released me and apprehended him. I don’t even have what to eat not to talk of the money to go and pay ransom.

Reacting to this one Sandiberry on IG wrote; “Yet the government look away *zoo country*meanwhile,What’s up with whole tribal shit I’ve been reading so far,we are one creation ,kindly preach peace and love. Thank you .”

kvngfolx wrote; “I don’t understand why people are making jokes out of this. Nigeria is bleeding and you guys feel because it’s not yet in Lagos and Abuja y’all are safe. Just wait and see.”

jemima_ wrote; “people laughing because he’s a Northener . forgetting this can happen to anyone . if reverse was the case we’ll be hearing ” humanity first ” , but he’s a Muslim & a Northerner its ok to laugh at his pains . Northeners voted Buhari anyways .”