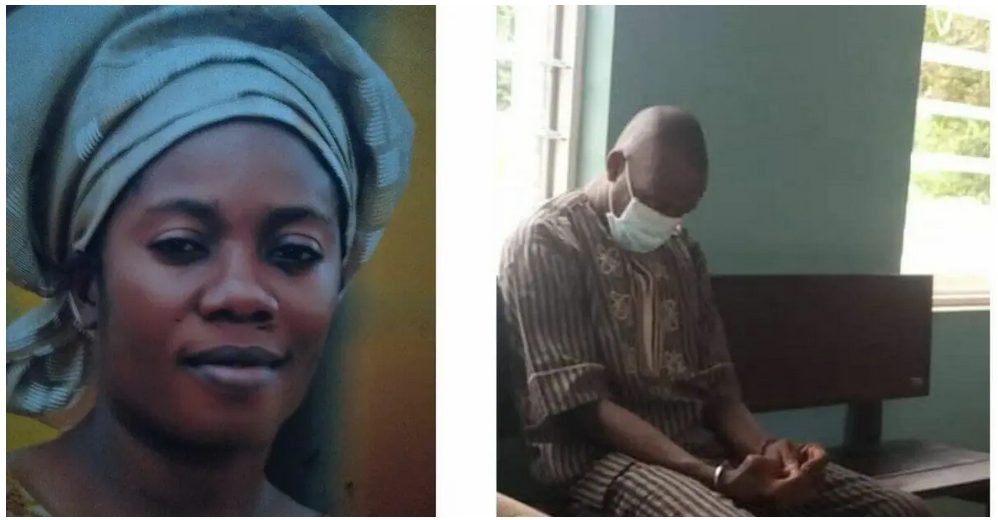 37-year-old truck driver, Adeyemi Morenikeji, has been sentenced to death for the murder of Mrs. Racheal Ayanwale, his boss’ wife and a staff of Federal School of Surveying Oyo.

Morenikeji, a former employee to the Ayanwale family, had confessed when paraded at the Oyo State Police Command headquarters, Eleyele Ibadan, on April 11, 2019 that he lured the woman out of her office under the pretext of helping her to seek spiritual solution to her marital problem.

He said that he strangled the woman to death on their way to a spiritual house, dumped her body by the river side and went away with her Pontiac Vibe vehicle with registration number KJA 67 CY. He was arrested by men of the Oyo State Police Command on April 18, 2019 at Sango-Ota, Ogun State.

Justice Adenike Adeeyo also sentenced Morenikeji to 14 years imprisonment with hard labour on a Count Two robbing the deceased of her Pontiac Vibe car with registration number Lagos KJA 67 CY, its particulars, as well as itel and Nokia phones on the day she was murdered.

The judgement, in the case of The State vs Aderemi Morenikeji, was pronounced on Friday, July 16, with two-count charge preferred against the accused in a suit with charge number HOY/IC/2020.

Delivering the 60-page judgement, Justice Adeeyo read the offence the accused was said to have committed, and the change he later made in his initial confessional statement to the police during investigation, with the claim that he wrote the statement under duress and with torture.

But the judge said that with his initial statement and those of prosecution witnesses, as well as the result of post mortem by a pathologist, it was evident that the accused committed the act.

MORE:  Photo of former PA arrested for the murder of Gokada CEO, Fahim Saleh, is released as more details about the murder is revealed

But the judge said that with his initial statement and those of prosecution witnesses, as well as the result of post mortem by a pathologist, it was evident that the accused committed the act.

Count One of the charge: “That you, Aderemi Morenikeji on or about 21st day of April, 2019 at about 1400hrs, between Schol of Surveying and Awe Road, Oyo in the Oyo Judicial Division murdered one Racheal Oyewumi Ayanwale (female) by strangulation and thereby committed an offence contrary to Section 316 and punishable under Section 319 of the Criminal Code, Cap 38, Vol. II Laws of Oyo State of Nigeria 2000.”

Count Two: “That you, Aderemi Morenikeji on or about the 11th day of April, 2019 at Awe Road, Oyo in the Oyo Judicial Division having strangulated and murdered one Racheal Oyewumi Ayanwale (female) robbed her Vibe Pontiac car with registration number Lagos KJA 67 CY valued at N1,720,000 (One Million, Seven Hundred and Twenty Thousand Naira and thereby committed an offence contrary to Section 401 and punishable under Section 402 of the Criminal Code Cap 38, Vol. II Laws of Oyo State of Nigeria 2000.”

After being asked to make an allocutus (plea), the defendant pleaded for mercy, saying that he had no justification for what he did and had no one that could help him. The defence counsel, B.A. Oyelami, also appealed to the court to temper justice with mercy, as the defendant’s father is aged and he also had many children to take care of.

But the prosecution counsel, Kayode Babalola, asked the court to note the demeanour of the defendant from the beginning, to know whether he was sober, with the fact that the court could not go out of the prescribed punishment for someone who committed murder.

After the allocutus, Justice Adeeyo pronounced the judgement thus: “The defendant is guilty on Count Two for robbing Mrs Ayanwale of her Vibe Pontiac car and is hereby sentenced to the maximum of 14 years imprisonment with hard labour.

“In Count One, I considered the allocutus of the defendant and his counsel pleading for mercy. Unfortunately, the court does not have discretion in the sense that if the law says it is death, you cannot reduce it. Consequently, the defendant, Adeyemi Morenikeji, is guilty as charged for murder, and is hereby sentenced to death.”

The judge also ordered that “the Vibe Pontiac car with registration number Lagos KJA 67 CY belonging to late Mrs Racheal Ayanwale be released forthwith to the husband, Mr Sunday Ayanwale with two phones, and the particulars of the vehicle.”