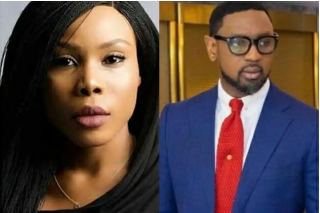 Uzo Osimkpa, an actress, has attacked pastor Fatoyinbo, saying it’s inappropriate for an alleged r@pist to claim that Igbos have a hard time donating to God when that isn’t the case.

Pastor Fatoyinbo claimed in a post that despite their claim to believe in God and having a large heart, it is difficult for Igbos to donate money to the church, claiming that it requires God for an Igbo man to give to the church.

Uzo Osimkpa, in response, criticized the pastor for stating it had entered her blood, adding that what he stated isn’t even factual and that it’s unacceptable for an accused r@pist to declare that Igbos have a hard time donating to God.

According to her, the pastor is a serial r@pist and murderer of character and tribe, claiming that he has never had and will never have sense, and that if he had, he would know that Igbos are the most open-handed to their brothers, community, church, and parishes to which they belong.

She then cautioned that no one should come after her because if they did, she would be killed. you will collect fresh 2022 Nigerian inflamed venom and vawulence especially when affiliated to the pastor she refers to as a r@pist who is mad and cynical.