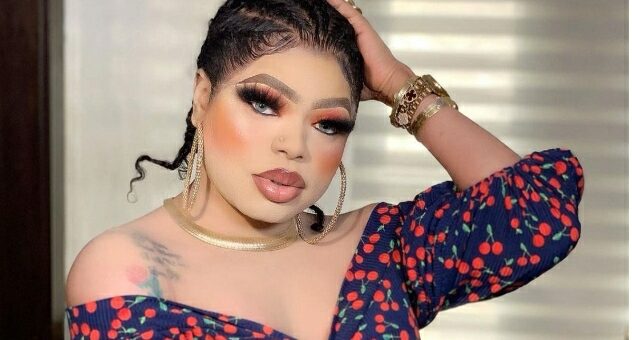 Controversial Nigerian cross dresser Idris Okuneye also known as Bobrisky has taken to his page to show the end result of his Brazilian Butt Lift.

Recall that Bobrisky made it known on his Instagram page that he would be going in for a butt surgery called the Brazilain Butt Lift to enhance his body shape. Bobrisky disclosed that he will be having his butt lift surgery in the Dominican Republic. However, a few hours after, he was busted that he did his surgery in Nigeria, a hospital in Lagos.

In other news, controversial Instagram blogger, Gist Lovers has taken to her page to disclose that about 85% of Bobrisky’s skin is damaged and might die after the surgery.

According to the post spotted on gist lovers page, she said the doctor told the crossdresser that his skin is 85% damaged therefore undergoing cosmetic surgery is very risky for him and even advised him that he should postpone the surgery but he vehemently refused.

“Why all these Una yeyebrity dey lie?Why??
Information reaching the VAWULENCE HEADQUARTERS states that Idris Okuneye Aka Bobirisky no comot for Lagos o to do any surgery,Na Lekki baba Dey but I will withheld the name of the hospital make I no cause gobe“.

“It was revealed that,After checking and running test on him, Bobrisky was told to wait for 2months because his skin damage is 85 percent and that is a big risk. Bobo say no he wants it in 2months and signed all the necessary documents that no one should be held responsible if he dies.THE MATTER NA IF I DIE I DIEThis Doctor is a very popular doctor,all of Una sabi the doctor but me I no go call name sha make i no spoil the doctor workI come in peace,Igi Ewedu oni wo pawa o,Dr Anu knife no go touch us o”