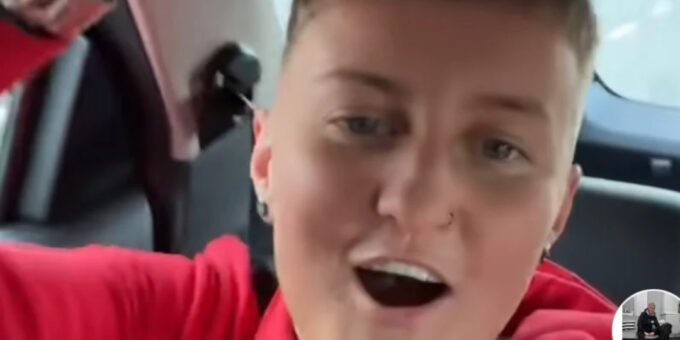 There are a number of different reasons why TikTok videos go viral. It could be because it’s really relatable, disgusting, part of the latest trending challenge, or maybe they’re showing off a really cute puppy.

But there’s one type of video that will always be the most popular, and that’s comedy. We all love a good laugh, and if a TikTok is really funny, it’s bound to go viral.

TikTok users are obsessed with a viral video known as ‘Say Hello Jamie Lee’, and it’s had everyone in stitches.

TRENDING NOW>>  Twitter: What is the meaning of /p? Tone indicators explained

This ‘Say Hello Jamie Lee’ tryvideo is taking over TikTok

This week, a TikTok user from Northern Island has gone viral after she posted a hilarious video.

On April 9th, 22-year-old Caitlin Watters from Belfast, who has 88,000 followers on TikTok, posted a video where she did a shoutout to a person called Jamie Lee.

Then, she turned the camera onto Jamie Lee, who was actually sitting in the front of the car and hilarious shouts: “Hello everybody!”

The video is totally chaotic, and because of their thick Northern Irish accents, it’s incredibly difficult to understand what any of them are actually saying, which only adds to the hilariousness of the video.

The video has now been turned into a meme, and everyone is quoting ‘Say Hello Jamie Lee’ on Twitter.

One person tweeted: “These have had me laughing since yesterday.”

“Watched it over and over, tears in my eyes,” wrote another.

A third person said: “This girl is responsible for the funniest video I’ve seen in years…. Go on wee Jamie Lee you legend.”