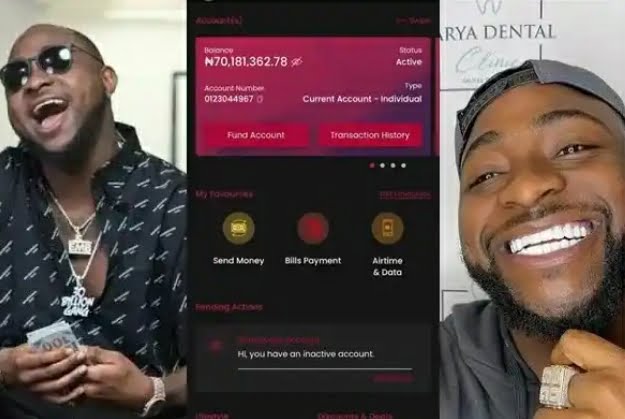 Wema Bank is said to have set up a meeting with Nigerian musician Davido after his bank account was flooded with millions of dollars from fans and celebrities just before his birthday on November 21.

The serial hitmaker and music entrepreneur had previously stated that everybody who had heard his hit song should pay him money, following which he published his bank account information online.

After receiving millions of naira from numerous people, what began as a joke has turned into a big day for the musician.

He stated he was going to use the money to get his new Rolls Royce out of the port. “If you know I gave you a hit song.. send me money…. una know una self oo,” Davido wrote on Twitter.

MORE:  "I will rather sell my nudes and videos to survive than beg online” – Tribal mark model, Adetutu reacts after being asked why she is now an ‘online sex worker’

The musician had received almost 70 million naira in his account as of press time.

Aside from that, Davido claims that Wema Bank has invited him to a scheduled meeting to discuss his massive sum of money.

Apart from that, despite the police administration’s warnings, a man of God has forecasted Shatta Wale’s future, led by the newly installed Inspector General of Police (IGP) Geroge Akuffo Dampare.

The surprise in this story is that this prophet did not make a doom prophecy, which is the premise of the warning to prophets across the country to stop instilling fear and panic through prophesies.

The unknown preacher declared confidently in an Instagram video that the numerous award-winning performer, who recently had a run-in with the law due to his fake gun attack, is destined to become a pastor.

He went on to say that Wale’s recent incarceration was simply God’s plan to accomplish his will, and that he will soon take to the pulpit to preach the Gospel. Watch the video below to learn more.