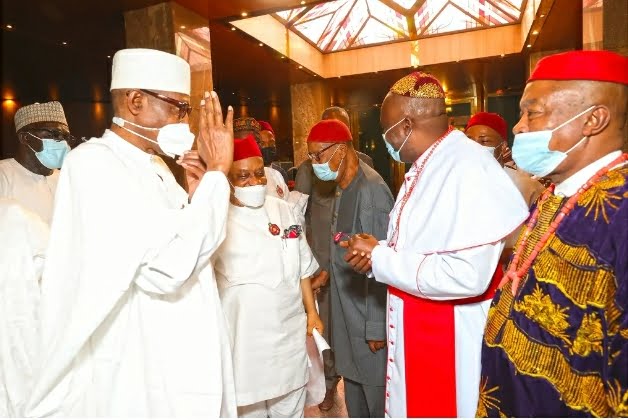 President Muhammadu Buhari has stated that he will consider the appeal of Igbo leaders to free Nnamdi Kanu, the detained leader of the Indigenous People of Biafra IPOB.

Today, November 19, Buhari made the comment while receiving certain southeast leaders at the statehouse. The demand for Kanu’s unfettered release, according to President Buhari, breaches the idea of separation of powers between the Executive and the Judiciary.

Under the banner of Highly Respected Igbo Greats, the President replied to a call made by a group led by First Republic legislator and Minister of Aviation, Chief Mbazulike Amaechi.

“You’ve placed a very severe requirement on me as the leader of this country,” he added. Your request has very significant implications. Nobody would suggest that in the six years since I became President, I have confronted or interfered with the functioning of the judiciary. God has preserved your life and blessed you with a clear mind and a sharp memory at your age. Many folks half your age are already perplexed. However, the demand you made is substantial. I’ll think about it.”

Under the banner of Highly Respected Igbo Greats, the President replied to a call made by a group led by First Republic legislator and Minister of Aviation, Chief Mbazulike Amaechi.

He pleaded for a political rather than a military solution, suggesting that if Kanu was delivered to him as the only remaining First Republic Minister, “he would no longer repeat the things he had been saying,” and that he could be controlled.

“I don’t want to depart this earth without my country regaining peace.” I believe in a unified Nigeria that is a force in Africa. Mr. President, I want you to be recognized as someone who saw Nigeria on fire and put it out.”