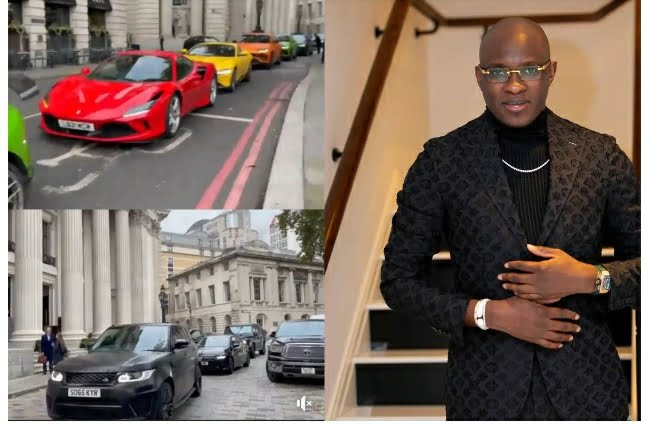 A Popular Nigerian pastor, Tobi Adegboyega has flaunted the different range of exotic cars his sons and daughters stormed his birthday party with at church.

Pastor Tobi Adegboyega is the founder and leader of Salvation Proclaimers Anointed Church, a Pentecostal church in London, England.

Pastor Adegboyeg turned 41 on November 11 and his sons and daughters decided to come through on his birthday to celebrate the special day with him. In a video he posted on social media, he introduced himself and announced that his children had arrived and making their way to church.

He showed the luxury cars lined up on the street of London waiting for him to drive them to church and according to him, the motive for sharing the video is to inspire and encourage his fans and followers, but whoever gets offended by it does not like good things.

According to the clergyman, his children have worked extremely hard thus the luxury cars they own are a result of their effort therefore whoever is bitter about this is poor.

Sharing the video he captioned;

It’s 11/11 so we came out to play. We’re all going church now. You should watch the live service.Let’s have some fun: What’s your preferred colour?

“How many lambos can you spot in the video?”