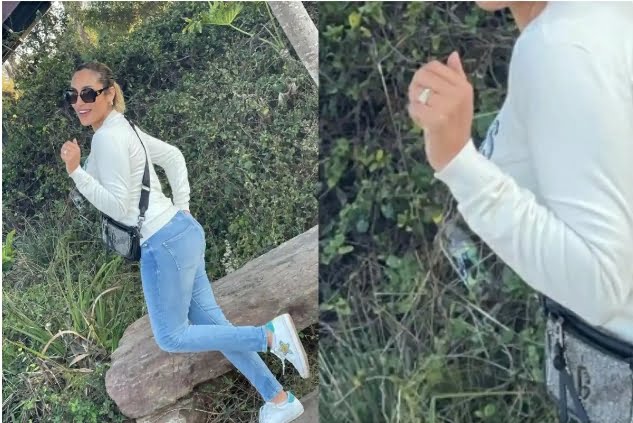 An inquisitive social media user has asked Ned Nwoko’s ex-wife, Laila why she is still wearing her ring despite the fact that she is no longer married.

The social media user asked this question while commenting on a recent post made by the beautiful Moroccan on the popular social media platform, Instagram.

It could be recalled that Laila publicly revealed she is no longer marred to Ned Nwoko weeks ago and she even asked people to stop talking about her marriage to Ned Nwoko.

What many people expected was that she might remove her ring, however, she is still wearing and this prompted the social media user to ask the question.

Upon seeing the recent photos, the social media wrote;

“Your divorce but you still wearing the ring”

chiagozieezekwe – @myrakalonda Separated and divorced are 2 different things. I don’t think their divorce is finalized

oluwatosin_adewoyin – @myrakalonda o ya were ni? Are you the one that sing the divorce paper? An what’s your business in their families?did Regina send you too her?

vickydoll70 – @myrakalonda Is obly legally married to the first wife that is in London. All the other 5 are just traditional/marriage ceremony.

lovely_medi – @vickydoll70 traditional marriage is marriage too.and ned is a Muslim so he needs no white wedding

vickydoll70 – @lovely_medi I agree but in order to be entitled to anything you nees to be legally married. He can give her whatever he wants to but since they are nor legally married she’s not entitle to anything . she cant sue him. Basilly its whatever she already secured when she was there ans if he really want to help her after but legally she cant divorced if they are not legally married. They can only seperate & rveryone goes. there way but cant split their wealth like in a divorce. Its whatever he wants, id he want to give her. Its going to be hard….i pray God will help her.