Photos of the interesting development were shared online by a wildlife organization in Kenya.

According to the stray Zebra began an amorous affair with the donkey after it ventured out of the Tsavo East National Park, into a community bordering the park.

The organisation said the zebra became an honorary member of a local woman’s cattle herd before Sheldrick Wildlife Trust (an organisation that works to rescue and rehabilitate animals in Kenya), were called in to relocate the wildlife into a protected area.

The Zebra was transferred to Chyulu National Park, but her foal was only noticed a few weeks ago as it has a gestation period of 12 months.

Sharing photos of what has been referred to as a “zonkey”, the group wrote: 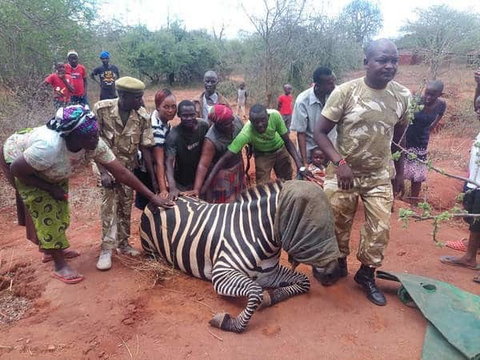 Zebra gives birth to Zonkey after mating with a donkey (photos)

“Working with wildlife, one learns to expect the unexpected. Even the most seemingly straightforward story can eventually reveal its true stripes and end up surprising us all.

“Last year, our SWT/KWS Tsavo Vet Unit moved a wayward female zebra from community land back to a protected area. It was an uneventful translocation and the zebra has been loving life since. We did, however, have quite the surprise recently, with the appearance of a baby zonkey – a hybrid between a zebra and a donkey – by her side.

“Zebras have a 12-month gestation period, so it’s not been difficult to connect the dots as to the origins of this lovely little character. It seems that mum encountered a rather amorous donkey before she was moved!”

also shared an elaborated statement of the amorous Zebra and Donkey on its website.

“Last May, the SWT/KWS Tsavo Mobile Veterinary Unit received a call from the KWS Community Warden at Mutomo Station. A stray zebra that had ventured out of the Tsavo East National Park and into a community bordering the park. She made herself right at home there, becoming an honorary member of a local woman’s cattle herd. This situation continued for many weeks until the story was aired on local media, and then our team was asked to help translocate the zebra back to a protected area. 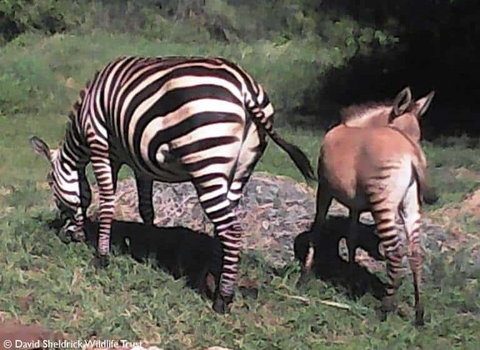 “At this point, the zebra had become fairly habituated to community life, so we had to choose her new home with that in mind. We settled on our Kenze Anti-Poaching Team’s base in Chyulu National Park, so they could keep a close eye on her while she settled into her new home.

“Translocating the mare was a straightforward process; after sedating her, the team put her in the back of a pickup truck and took the most direct route into the National Park.

“Waking up upon arrival, the zebra — who was quickly proving herself to be unflappable and extremely adaptable — got to her feet and ambled off into the bush. Our Kenze team saw her frequently over the coming weeks and months; she became a regular at the water hole and often availed herself of the nearby salt lick.

“We’re happy to report that mum and baby are thriving. Their new home is in an area that isn’t plagued by heavy predation and thanks to the lush conditions, water and grass plentiful it is a good place to call home.

“We have over the decades raised many orphaned zebras, and in time, we will add to this unusual pair when it becomes time to release any zebra orphans, while this unusual pair wait for some wild zebras to discover them both. Until that day comes, they seem quite content to spend their days grazing side-by-side, a sight that makes us all stop and marvel at the wonders of nature.” SWT wrote on its website.